It is said to be the most “European” city in Latin America and there is a lot of truth in that. Sexy and lively, Buenos Aires also has a touch of melancholy that makes it unforgettable. The Porteños (inhabitants of BA) are passionate, stubborn but also very friendly people. It is difficult to describe this huge metropolis in a general way, but it is possible to get an idea of it thanks to its history: the inhabitants of Buenos Aires are mostly descendants of southern European colonists who came from Italy or Spain at the beginning of the 20th century. This heritage is reflected in some areas of the city: the architecture of the Recoleta is reminiscent of Paris, the wide avenues in the center are reminiscent of those in Madrid and La Boca has the unfamiliar features of Naples. The city is at the same time unique, original, lively and sometimes very special. The kind of city that travelers fall in love with, dream about, and then decide to move to. If you’re planning a trip to Argentina, the capital is not to be missed. You will need to allow more than 3-4 days to enjoy it to the fullest. We have therefore listed the best things to do in Buenos Aires for you: 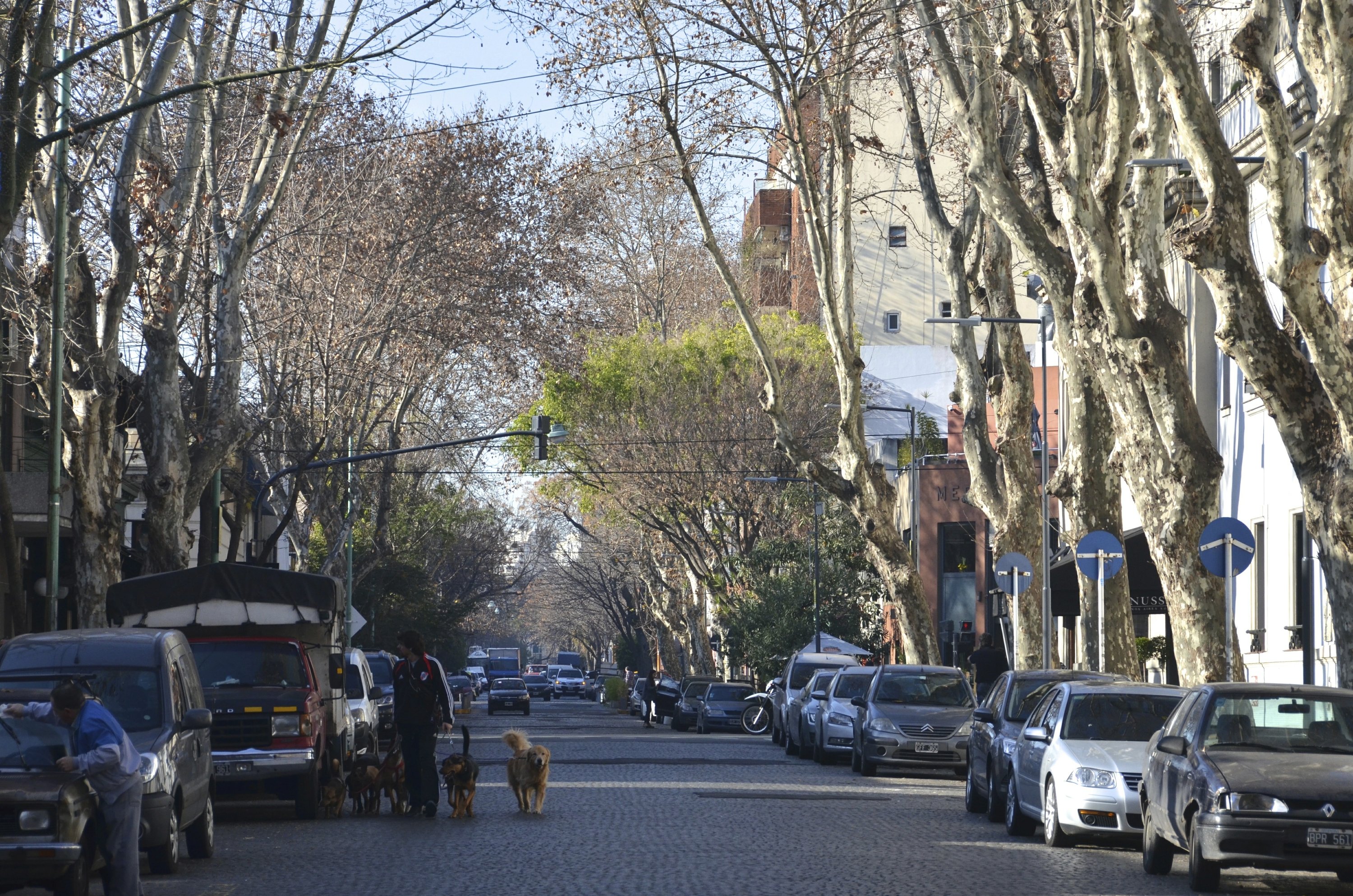 The chic and sprawling neighborhood of Palermo, north of Buenos Aires is divided into three parts: Alto Palermo, Palermo Chico and Palermo Viejo (itself made up of Palermo Soho and Palermo Hollywood). Alto Palermo is known for its museums and urban parks, such as the Carlos Thays Botanical Garden. Palermo Chico, home to extravagant mansions nestled behind the Museum of Latin American Art in Buenos Aires (MALBA), is a hidden spot often neglected by tourists. And Palermo Viejo is where you’ll find the most color and local touch. Palermo Soho is home to a wealth of upscale boutiques, lively cafes and bars, and cobblestone streets. Its neighbour Palermo Hollywood, just north of the Soho district, is full of lively tapas bars, movie studios, and festive open-air markets. Palermo is a great place to stay when visiting Buenos Aires. You may have read or heard that San Telmo is dirty, dilapidated and dangerous (especially at night). But don’t let that stop you because it hasn’t been the case for years. Discover San Telmo’s main artery, Calle Defensa. Here you can find antiques in the small shops around every corner. To go back in time, visit the pretty Pasaje de la Defensa (photo), an 1880 colonial house that has been renovated and is overflowing with bric-a-brac shops. Don’t forget to visit the Zanjón de Granados, a beautifully restored residence that encapsulates three centuries of city life.

Also, if you’re visiting Buenos Aires to dance, it’s nice to stroll around San Telmo, the birthplace of tango. In the evenings, many establishments come alive with tango shows. If you’re visiting the neighborhood on a Sunday, head to Plaza Dorrego where the Sunday market is held. 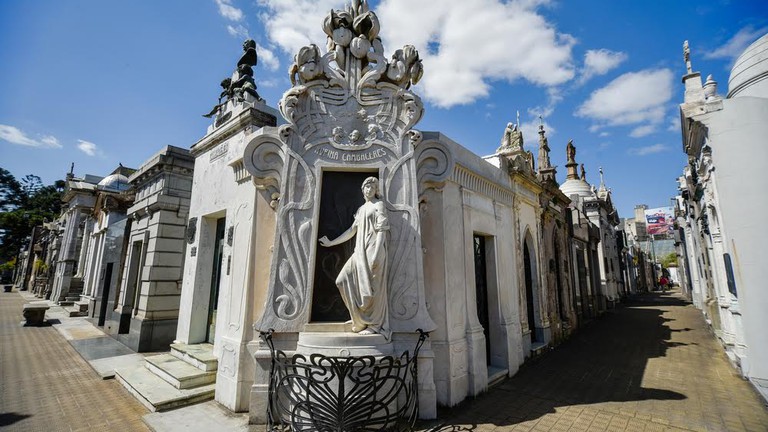 This cemetery is probably the number one attraction in Buenos Aires, and you’d do well to visit it. You will be able to walk for hours in this amazing city of the dead, where countless “streets” are lined with impressive statues and marble sarcophagi. Enter the crypts and discover the dusty coffins, most of which contain the bodies of the most elitist members of Buenos Aires society, and try to decipher the history of its inhabitants. Former presidents, military heroes, influential politicians and simply rich and famous people rest here. You will find yourself in the “Père-Lachaise porteño”. Stalking Evita’s grave is one of the best ways to find it: look for the crowd. Admission is free from 7 am to 6 pm every day. Guided tours in English (also free of charge) are possible every Tuesday and Thursday morning. 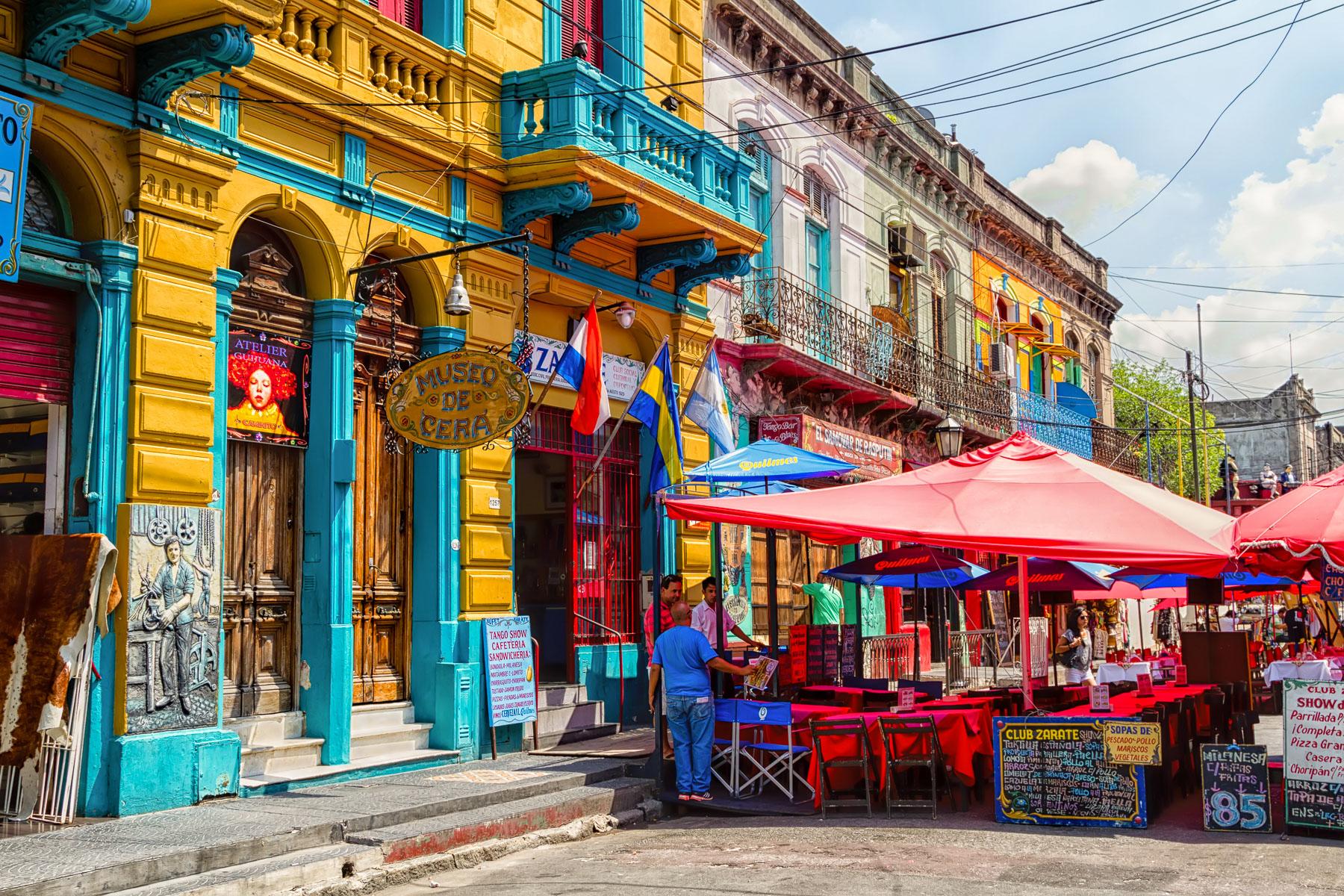 This trendy neighborhood in the south of Buenos Aires is full of trendy shops and art galleries. Once the site of a shipyard bustling with European immigrants, this vibrant port is now home to local artists, football fans, and middle-class workers of all stripes. The name of the neighborhood, which translates as ‘The Mouth’, is derived from its distinct location near the Río de la Plata (the estuary formed by the meeting of the rivers Uruguay and Paraná).

Visit the triangular Vuelta de Rocha square, from where you can stroll along the Caminito, a popular pedestrian street flanked by houses with colorful, shimmering murals. This historic part of Buenos Aires is also home to La Bombonera, the football stadium of the legendary Boca Juniors team. Although La Boca is very touristy, it is still a must-see area. You can easily visit it on foot. Don’t miss the Quinquela Martín Museum, La Boca’s Fine Arts Museum.

Attending a match in the La Bombonera stadium (Estadio Alberto J Armando) is a unique and breathtaking experience: the stands never cease to vibrate throughout the matches. If you want to ensure peace and quiet, go to the platea baja stand.

This sumptuous opera is as enjoyable to watch as it is to listen to the performances. In this grandiose venue, you can contemplate the European-style décor ranging from Italian marble stairs and Venetian mosaics to French stained-glass windows and a large sparkling chandelier. And if the spectacular architecture and design of the theatre doesn’t impress you, you should know that the establishment has hosted many world-class artists, including Richard Strauss, Igor Stravinsky and Luciano Pavarotti. Visit between April and December for one of the spectacular ballet or opera performances.

Taking up the entire eastern side of Plaza de Mayo, the inimitable pink façade of the Casa Rosada (Pink House) houses the presidential palace, which was painted in this color during the presidency of Domingo Sarmiento. Built in 1594, it now occupies the site where the fort of Buenos Aires once stood. This is where the offices of “La Presidenta” Cristina Kirchner are located, but the presidential residence is located in the quiet suburb of Olivos, north of the city.

The side of the palace facing the Plaza de Mayo is actually the back of the building. The salmon-pink colour of the Casa Rosada, which lights up at sunset, could be due to President Sarmiento’s desire to establish peace during his mandate from 1868 to 1874 (by mixing the red of the federalists with the white of the unitarians). Another theory, more likely, is that the colour of the palace comes from a combination of lime paint with oxblood. This practice was very common in Argentina during the 19th century. 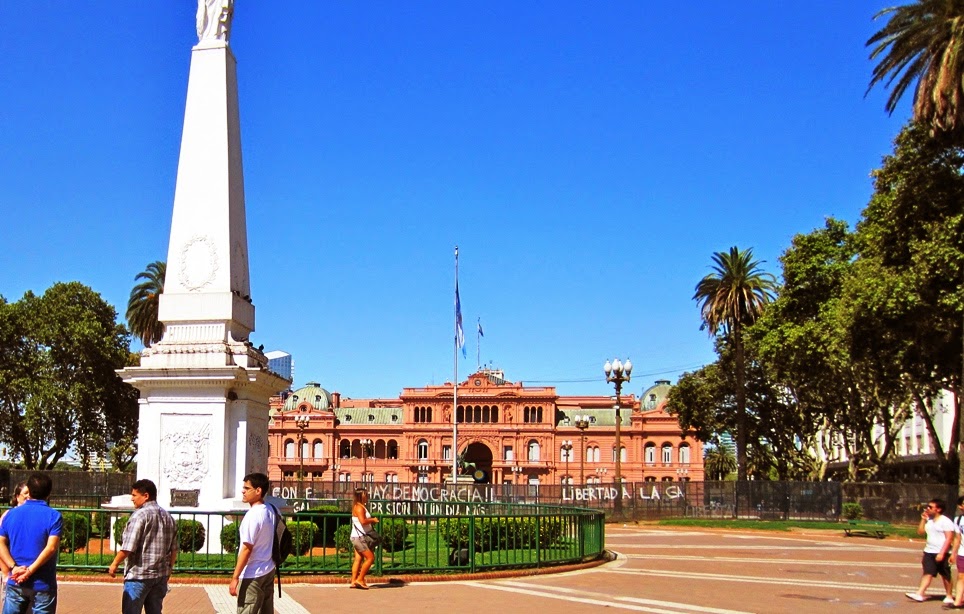 Tourists have been flocking to this historic square since Argentina declared its independence from Spanish colonial rule on May 25, 1810. Nestled between the Casa Rosada, the Cabildo and the city’s main cathedral, the green Plaza de Mayo is the main gathering place for Buenos Aires’ most vociferous protests. In the center of the plaza is the Pirámide de Mayo, a white obelisk built to mark the first anniversary of Buenos Aires’ independence from Spain. Emerging on the north side of the square is the impressive Banco de la Nación building (1939), the work of the famous architect Alejandro Bustillo.

No other city in the world lives at night like Buenos Aires does. Most clubs don’t even open until 2am and play sound until the children leave for school in the morning. What makes the nightlife here really unique is the diversity of places to go out and the styles of music that play. To find out the best places to have a drink and go out, as well as the best neighborhoods to go to at night in Buenos Aires, nothing better than reading our article Where to go out in Buenos Aires?

When locals or tourists are looking for a stroll along the waterfront, Puerto Madero is where they go. The bright lights of this neighborhood illuminate the port that once served as a major destination for European trade. During the day, it is a very quiet business district, but at night it is the trendy area where people gather to eat and drink.

Why not take advantage of being here to eat a good Argentine steak? Argentina is a country renowned for the quality of its beef and parrillas are swarming all over the city of Buenos Aires. 3 addresses with a solid reputation include Don Julio (in Palermo Soho), Cabaña Las Lilas (in Puerto Madero), and Gran Parrilla del Plata (in San Telmo).

It is in the popular district of Mataderos that this excellent folk market is located. Merchants offer handicrafts and regional specialties such as locro (a corn and meat stew) and humita (a mixture of corn and salted cheese wrapped in leaves). There are singers, dancers and gauchos, so it is a wonderful opportunity to meet locals in their traditional dress. There is even a gaucho museum nearby (on Avenida de los Corrales). From the city centre, take bus 155 (also signposted 180) or 126. The Fería de Mataderos is an hour’s drive away, but well worth it. You can also take a taxi to and from Mataderos if you get caught up in the weather.

11- Other ideas for sightseeing in Buenos Aires and its surroundings

You may spend more than 4 or 5 days in the capital and would like to have more ideas for activities and visits here in Buenos Aires. Here are some of them: