Skip to Content
Home Discover Mount Rushmore : Informations you should to know
by

Do you have the opportunity to go to the United States? Great! You plan your trip, and choose the cities or places you want to go to, and then… you realize that the United States is big… Very big.

So, unless you really want to discover Mount Rushmore by yourself, you will only do it if you visit the North-Western part of the country. That’s good, because that’s where you’ll find the biggest nature parks, like Yellowstone. South Dakota is not far away; Rapid City is the landmark on the map. So, you can plan your stay. And here is some tourist information to help you prepare your visit in the best possible way.

Getting to the Memorial

If you do not use the services of tourism specialists, such as tour operators or official guides, you will necessarily use a private vehicle to get to the Mount Rushmore site. There are many public bus routes, but it is not the fastest way. So, from Rapid city, take the US 16 road towards the South-West. 26 miles further, you will pass through the small town of Keystone, mainly made up of shops. Continue for another mile, then take the junction on Route 244, it leads you to Mount Rushmore. You won’t be able to miss it, just look up! 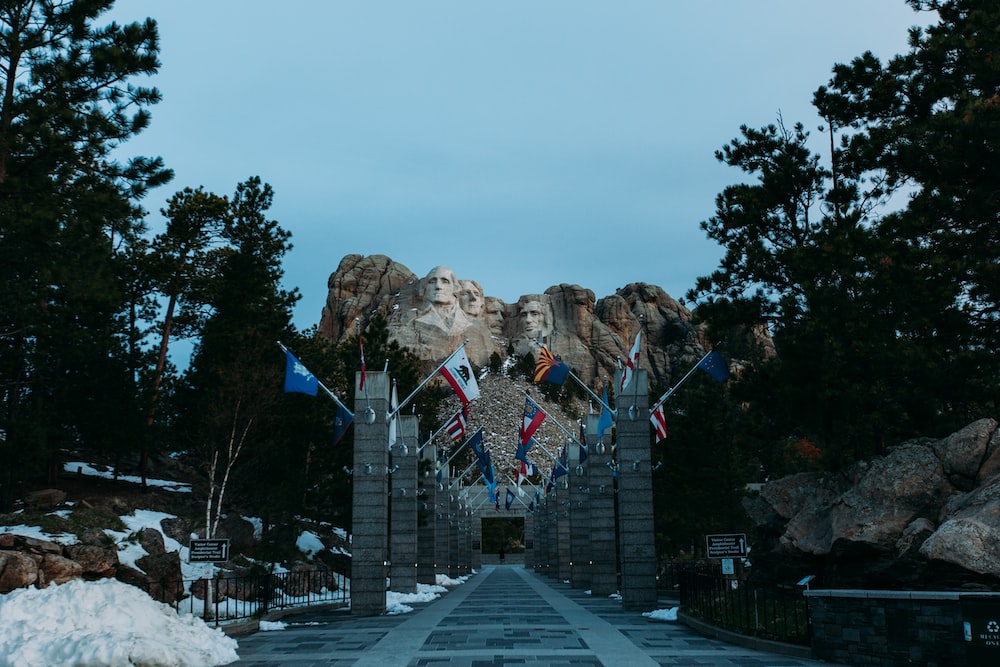 But don’t rejoice too quickly: In this country where money is king, you’ll have to pay for parking, and it’s $10. Sort of like a site fee, you know…

But if you want to be original, you might as well do it all the way: The entrance ticket is valid for one year, which means you can come back as many times as you want, you won’t have to pay for parking anymore. It’s very original, as a principle. And useful for the sound and light show in the evening. You can go and rest at the end of the day and come back in the evening, you won’t have to pay again.

Otherwise, budget-wise, the audio guides in several languages are available at a rate of 5$ each, a sliding scale for large families. And also that the site contains shops, of course.

The Mount Rushmore Memorial is open every day of the year except December 25, from 5 a.m. to 10 p.m. in the evening. Those are the parking lot hours and security arrivals. But the tourist infrastructure itself is open from 8 am to 10 pm from May to mid-August, from 8 am to 9 pm from mid-August to the end of September and from 8 am to 5 pm the rest of the year.

When to go on site

The good news is that there are no annual constraints due to the weather or any other external factors, you can visit Mount Rushmore any day of the year. Of course, in winter it’s quite cold in South Dakota (up to -7 on average in January), we are in the Northern United States. In the summer it’s the rush that’s annoying. But all in all, these are not prohibitive periods.

On the other hand, the visiting time is important. If you have the possibility, go early in the morning. It’s simply because the monument faces east, so the sun hits it from the front at sunrise.

The parking lot is small enough for such a site, but it seems sufficient. It is made in two parts, each of which can accommodate a hundred vehicles per level. Parking is paid for at the entrance, there is a kind of toll.

It is useless to try to park elsewhere. It is possible of course, along the road or on flat forest areas, but you will find yourself walking a lot and finally by a lot.

As a national memorial, the site is well equipped to handle tourists, of course. Apart from the car parks, there is a “visitor center” which takes care of various questions or requests, such as organizing a private tour, a restaurant, an ice-cream parlour and a souvenir shop. There are all the necessary amenities, including for people with reduced mobility, except for the “hiking” part of the site. And it’s a shame because that’s the whole point of this memorial, in addition to the view of the statues of course. But let’s be honest, building a path accessible to wheelchair users is simply impossible here.

Otherwise it is possible to hire the services of a ranger to visit the site, the equivalent of a guide, in a natural environment. Usually he presents the site in 30 minutes, these are small sessions. If you prefer, there are also audio-guides in several languages, which can be rented for 2 hours, the classic duration of a visit to the site.

All in all, Mount Rushmore is an interesting tourist site to see. Maybe not enough to cross the United States to get there, but a trip to the North of the country must pass through here, necessarily. There are different things to see, it’s quite fun, but all in all it’s not the historical site where you’ll learn the most about the history of the United States either. Besides, the whole visit usually takes 2 to 3 hours, not much more. 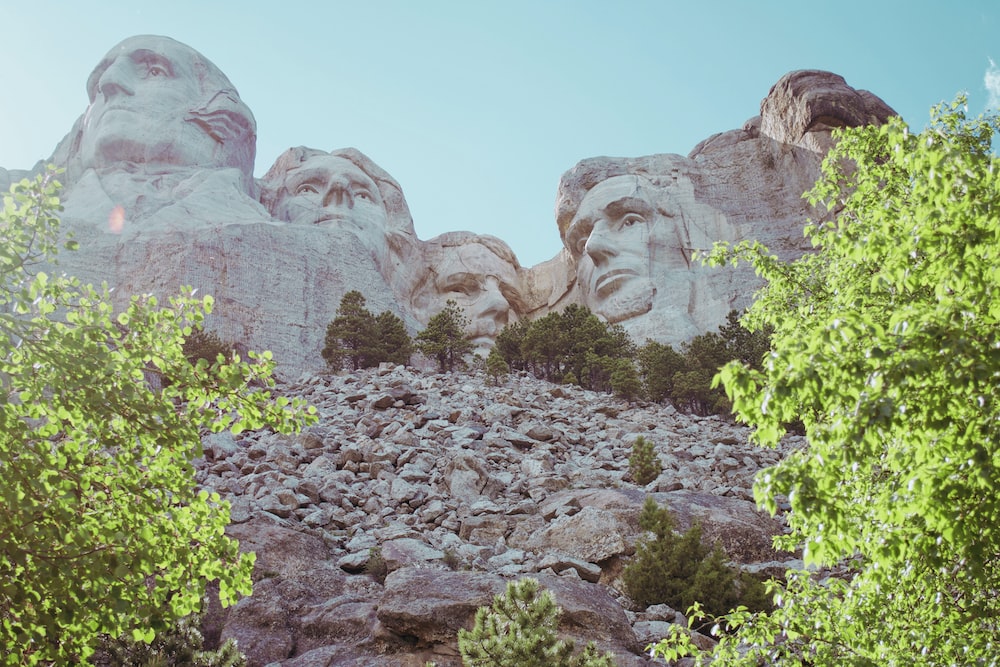 When you get there you will see, inevitably:

The faces of the presidents

The avenue of flags

It’s the alley that leads from the reception center to the esplanade. It’s quite long and is named after the many flags that line it.

It is the famous esplanade that offers the most beautiful panorama of the monument. But in itself, it is nothing more than a large terrace.

The presidential trail is the name given to the path that approaches faces. It is a mountain trail, wide and very easy to use, which comes as close as possible. But don’t think you will arrive right next to the statues, this path stops on an open space to have a nice view, but you remain quite far from the faces. In any case, it is absolutely necessary to take this path, it is not only very pleasant, but it also leads to other elements of the visit as indicated below.

Don’t expect anything grandiose, this museum is very small and its main role is to show you a 13-minute film on the history of the site.

This is the sculptor’s studio, the place where Gutzon Borglum worked. More interesting than the museum is the large model he built to follow the project. You can see that the mountain was supposed to be entirely sculpted, whereas nowadays only the faces have been sculpted.

As the statue of Mount Rushmore is controversial among the Indian population, the authorities have reconstructed an Indian village in order to present, in a playful way, the culture of the local natives, before the arrival of the settlers.

All these elements to be visited are described more precisely in the description of Mount Rushmore.

From mid-May to the end of September the memorial site presents a sound and light show in the evening (at 9pm, 8pm at the end of the season). It is a 40-minute film on the history of the United States, focusing on the four presidents of the monument: George Washington, Thomas Jefferson, Theodore Roosevelt and Abraham Lincoln.

Once completed, the monument is illuminated for two hours every night. 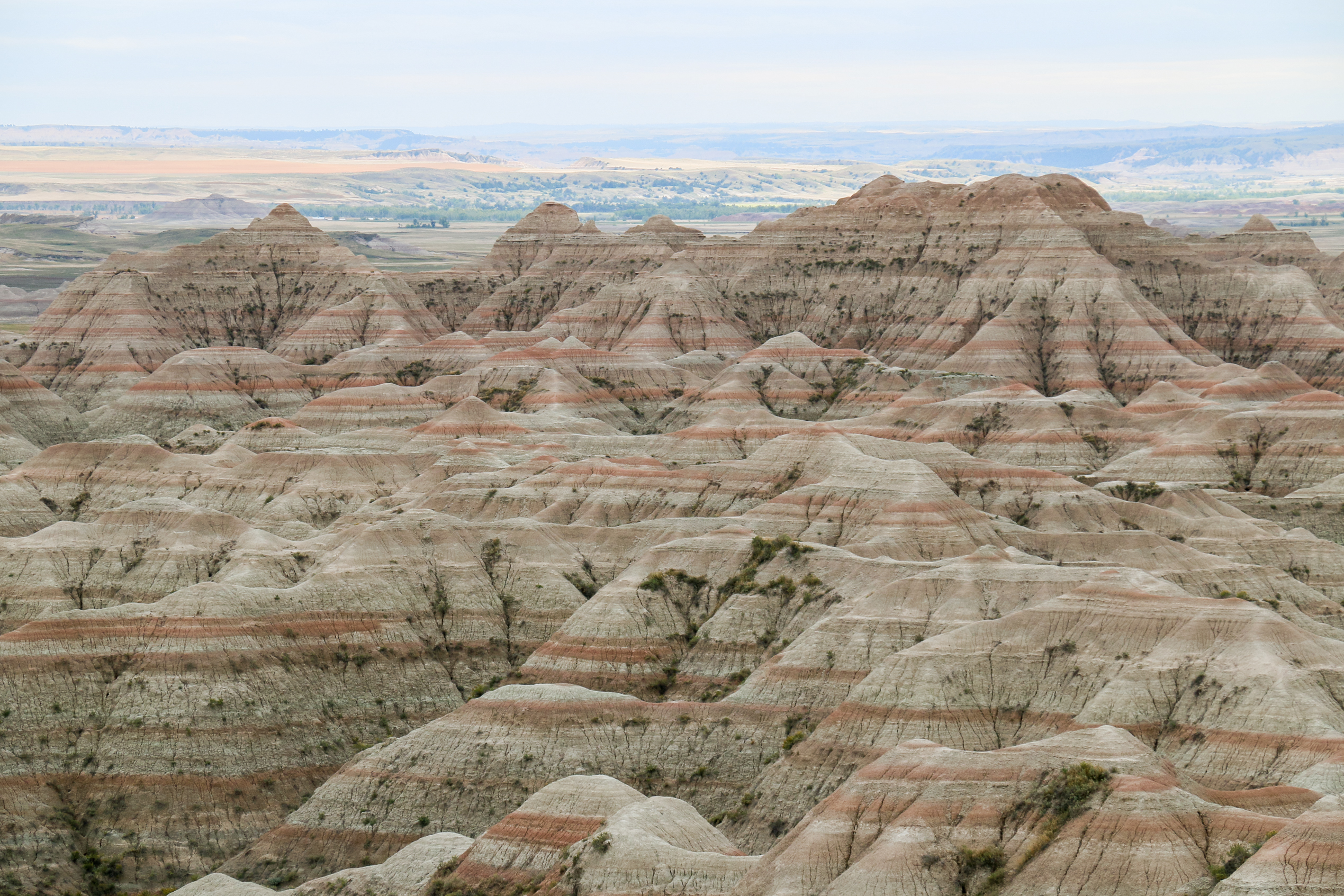 It is a national park characterized by its rugged hills and tormented relief. Each mountain is striated by erosion which brings out successive layers of soil. It’s a bit like the Grand Canyon, but far from it.

This national park is known for its thousand wild bison. It is a large natural site where it is pleasant to walk around.

This simple farmhouse, a relic that has been carefully preserved, is the place where the author of the novel “La petite maison dans la prairie” grew up and from which the television series was taken.

It’s the Indian equivalent of Mount Rushmore. Huge sculpture of a mountain, it’s still under construction. It represents a warrior of the Lakota tribe, who live there. South Dakota was also the land of the Nakota and Dakota Indians. This monument is entirely funded by donations because it is seen, from an American perspective, as a reminder of the Indian genocide that took place during the colonization of the land of America. The Indians, on the contrary, had suffered Mount Rushmore as an insult to their history, with the invaders building a monument to the glory of their rulers directly on their land. This monument is therefore controversial… But still, it is moving forward, little by little.

This national park is original in that it is home to the largest cave system in the world, at least according to those who live there. Still, many of these caves can be visited, and the name “wind cave” comes from the fact that they are sometimes open at several ends, causing draughts.