Skip to Content
Home Europe What are the best things to do and see in Naples ?
by

Naples is certainly a city that cannot be discovered all at once. There is so much to see, so much to visit in Naples in terms of architecture, cultural activities and history. Between the museums, the walks, the shopping, Naples has this side that is both fascinating and unbearable. You either love it or hate it, but this city, capital of Campania, is difficult to tame.

The hectic traffic, its frantic pace that leaves the impression that it never stops, one has the feeling that Naples is tireless and yet it retains that charm and southern warmth that make it a very popular destination. The warmth and friendliness of its people, the sense of welcome and generosity quickly make you forget the few negative aspects of the city. And for those who love history, Naples offers you the chance to plunge into the middle of Greco-Roman ruins but also to wander between Baroque palaces with the smell of a good pizza and the image of an Italian cinema of the 50s in mind. So cosmopolitan and popular Naples is not going to leave you breathless, rest assured! 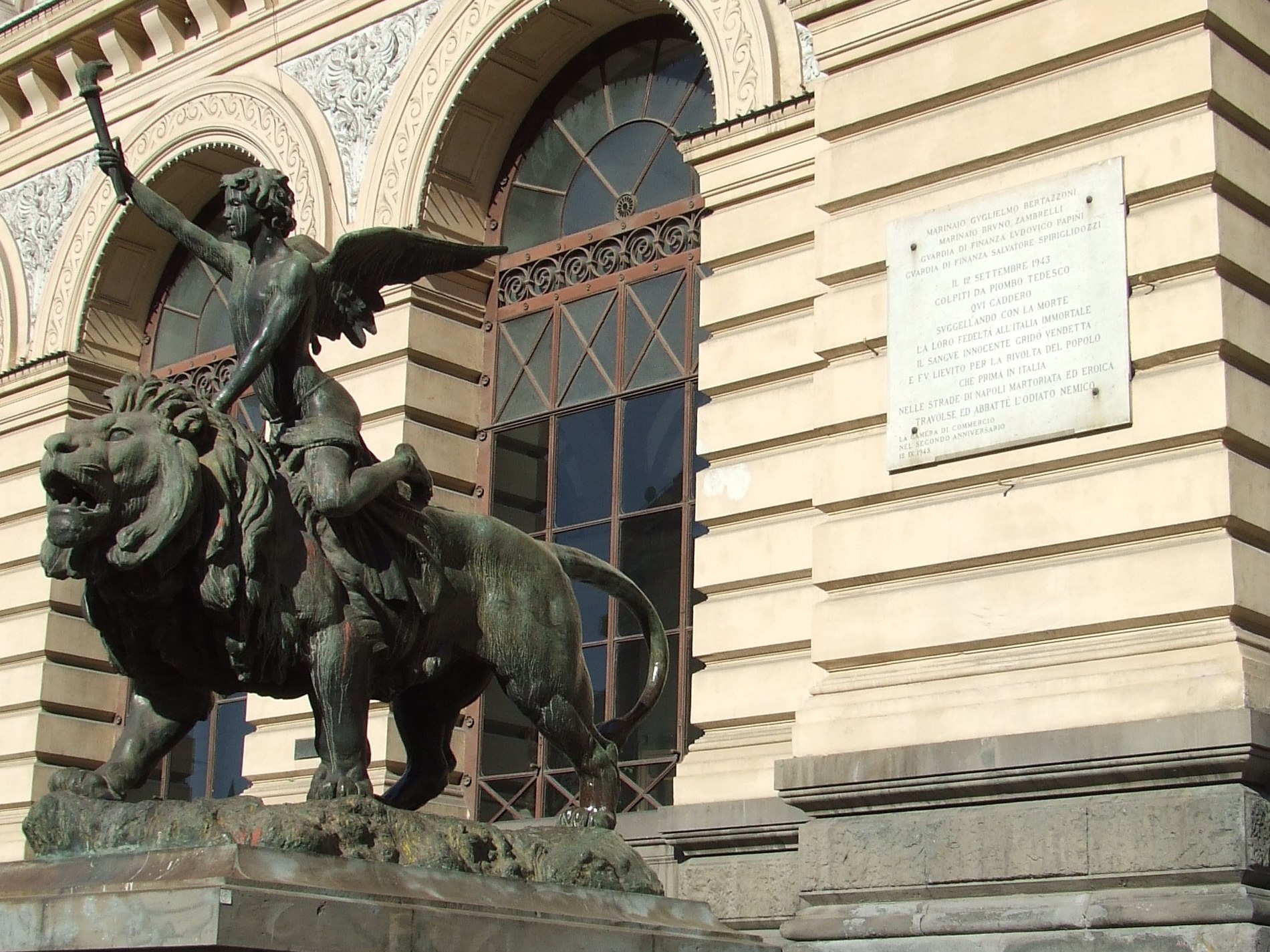 Also called Piazza del Plebiscito, it is surely one of the most beautiful and largest squares to visit in Naples, located in the heart of the city, not far from the Gambrinus café and close to the Royal Palace.

The square has the shape of an ellipse and is now entirely pedestrian. Note that during the Christmas period, it is possible to attend small open-air operas!

2- The Galleria Umberto I

Although it closely resembles its counterpart, the Vittorio Emanuele II Gallery in Milan, this gallery is one of the main tourist attractions to visit in Naples. This huge shopping mall is famous for its shops and small cafés, but above all, it is an opportunity to stroll with your nose up in a place where Renaissance-style architecture flourishes in every corner.

The glass roof is huge and very impressive, the central dome reaches up to 57 meters high and you can notice that the floor is made of a giant mosaic representing the zodiac. A very pleasant place which is very appreciated by all the inhabitants and tourists. 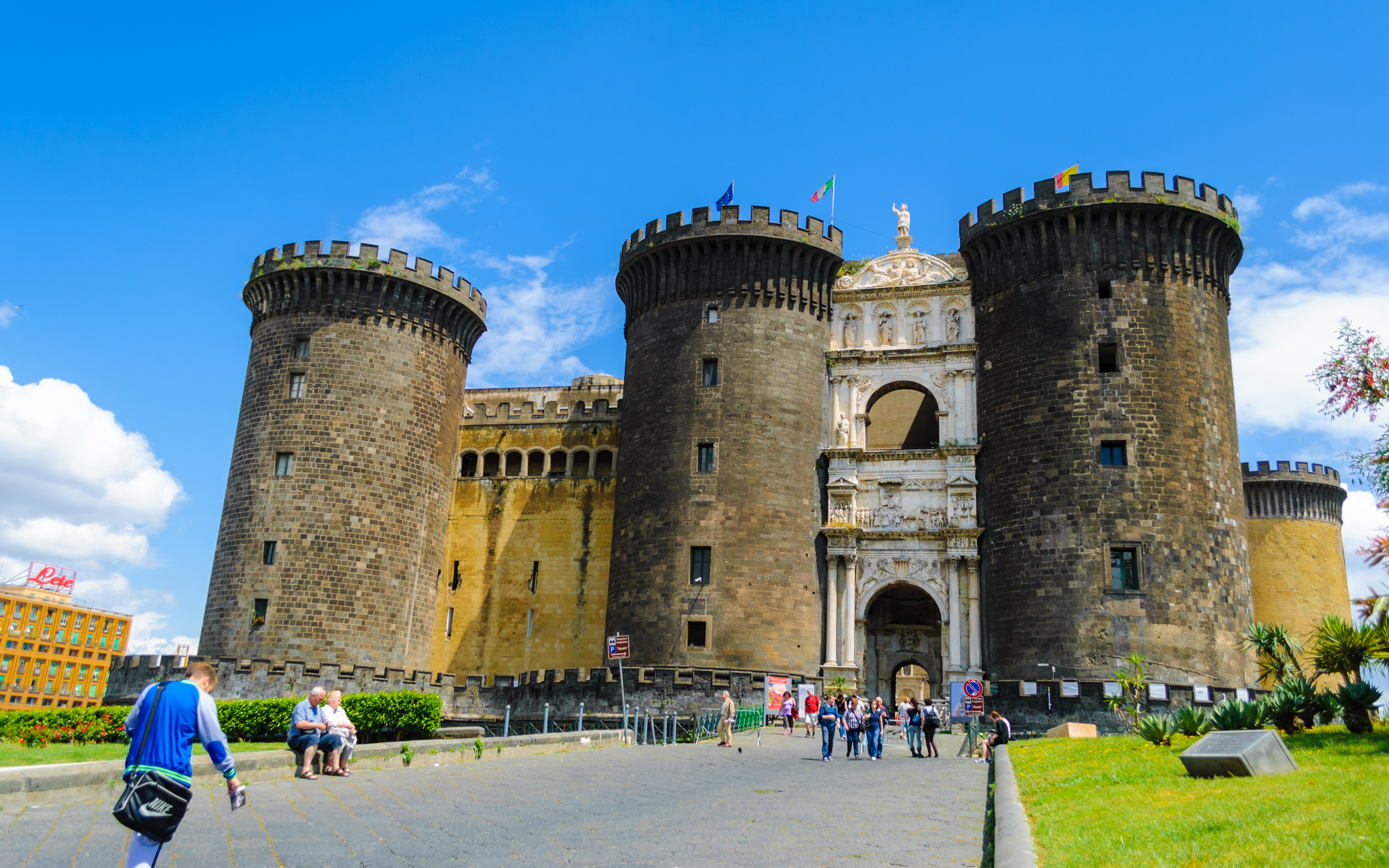 This castle is so called to distinguish it from the oldest royal residence, the Castel dell’Ovo. It is a huge fortress that makes a strong impression and dominates the entire port city of Naples. The triumphal arch marks the entrance to the castle.

This castle is also the largest classical archaeological museum: it houses the largest art collection in Italy with the Farnese collection, as well as ceramics, paintings, sculptures and jewellery dating from the time of the eruption of Vesuvius, not far from the city. Other objects are also shown such as gladiators’ equipment.

4- Castle of the Egg (Castel dell’Ovo) 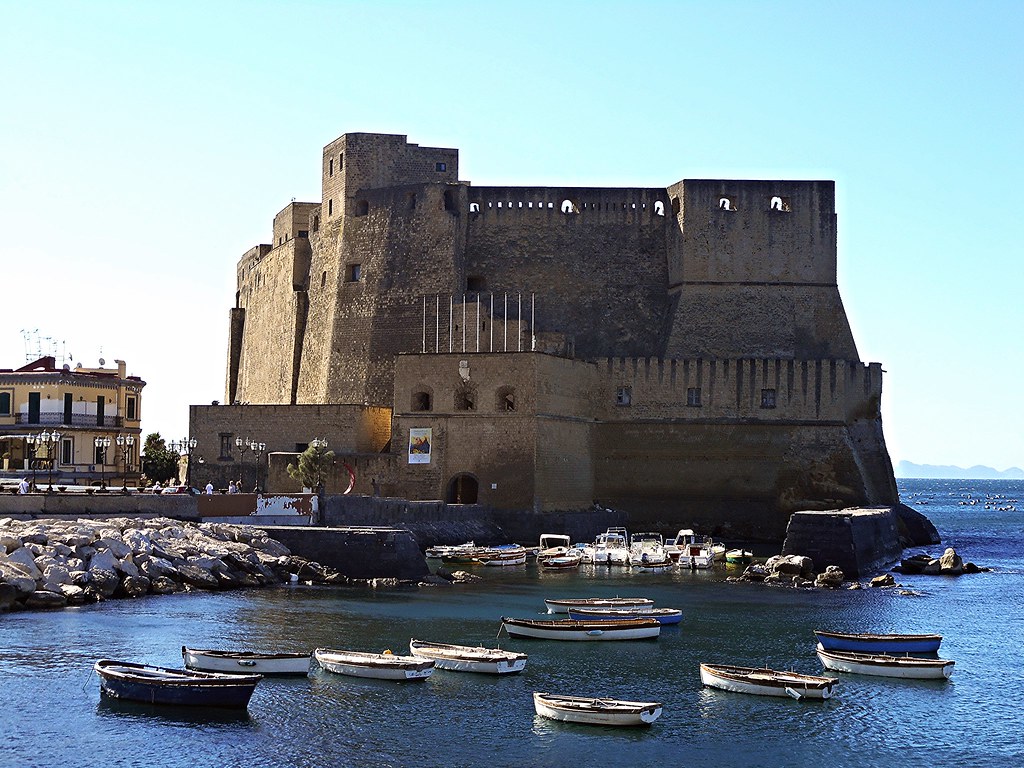 The Castle of the Egg (Castel dell’Ovo) is located on the islet of Megaride, inside the Gulf of Naples. Legend has it that a hidden egg supports the entire structure of the building. To be discovered for its terrace with its coat of arms, the tourist port at the foot of the castle and to discover the secret of the famous enigma of the egg. 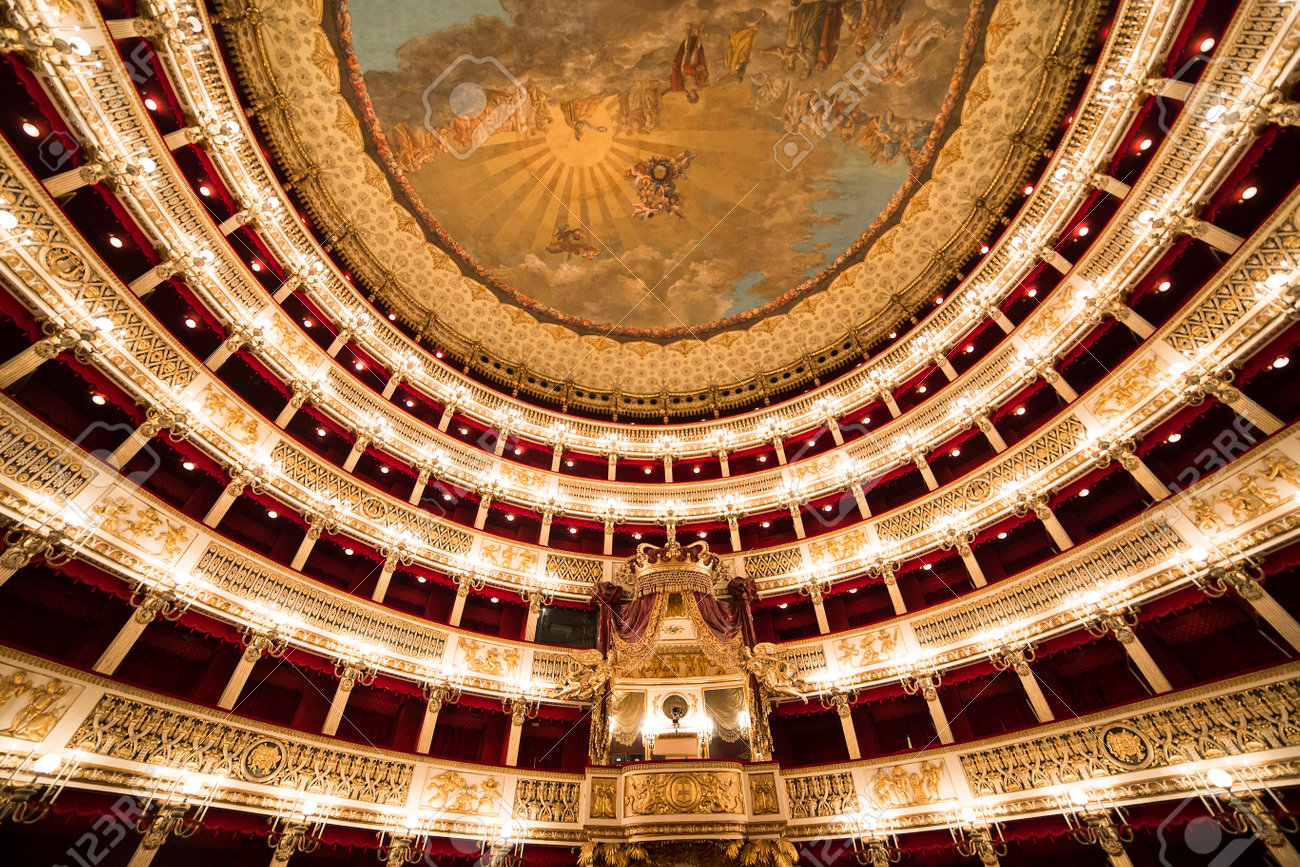 Built in 1601, the Royal Palace has undergone many transformations since then and finally finished with a style that is definitely Baroque. The exterior structure is very impressive and its interior is no less impressive: marble staircases and columns, statues, large lamps. It is located in the heart of Piazza del Plesbicito.

7- The cloister of the Basilica of Santa Chiara 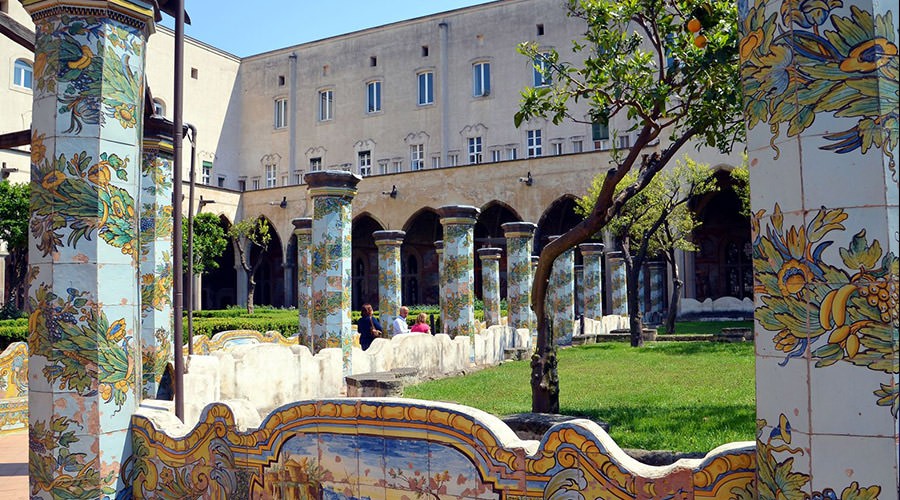 For those who want to rest or surround themselves with beauty, the cloister of Santa Chiara is a real little haven of peace. It was restored not long ago and now you can see pastel-coloured frescoes on the walls. The garden is lined with decorated colonnades, creating an extremely bucolic atmosphere.

To take a break in this noisy and hyperactive Naples, why not indulge in a few moments of sweetness?

A visit to Pompeii is certainly the best thing to do outside Naples. Pompeii is the most visited archaeological site in the world thanks to the remains of the city submerged by the ashes of the eruption of Vesuvius in 79 AD that caused its destruction.

Inscribed on the UNESCO World Heritage List in 1997, the site has always been a place of great interest and fascination for all lovers of ancient history.

Like Pompeii, Herculaneum succumbed to the terrible eruption of Vesuvius in the year 79. The inhabitants had no time to flee and everything remained in its place, buried under ashes to freeze the city in time. Although Herculaneum is not as famous as Pompeii, the city has nothing to envy it, since it is much better preserved than Pompeii.

The cliffs and caves of the island of Capri have amazed visitors since the island was first colonized by the Greeks. As you approach the island on a ferry, it is easy to understand why artists and writers have immortalized the beauty and history of Capri.

On the island, board a boat to visit the Grotto Azzurra, a cave with beautiful blue water. Discover Anacapri, the lesser-known part of the island. Finish off with an ice-cream tasting while strolling around Marina Piccola or Marina Grande, an ancient Roman fishing port. 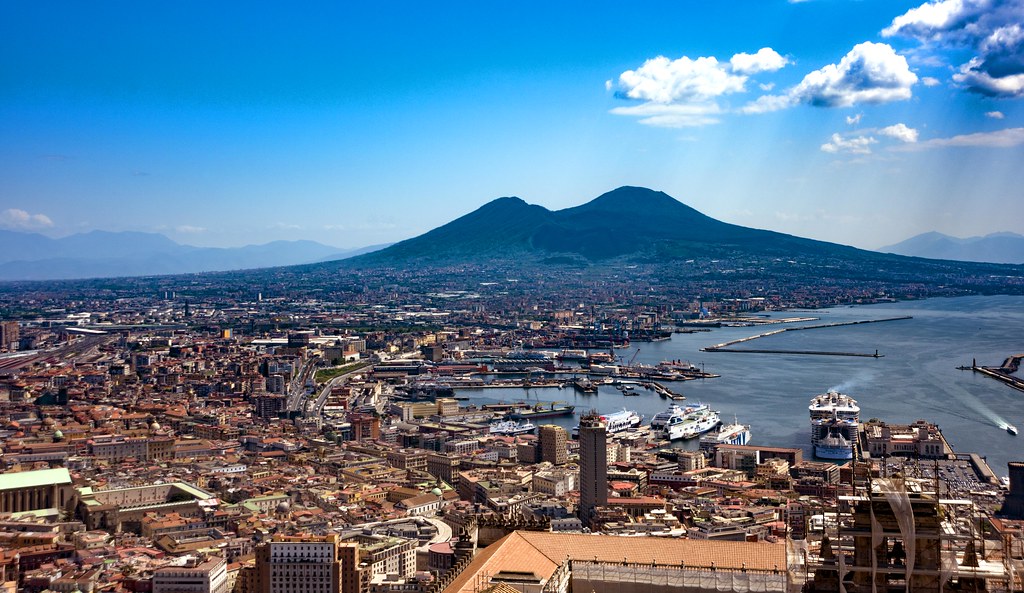 Vesuvius is one of the most famous volcanoes in Europe, especially for its great eruption on 24 August 79, which destroyed the cities of Pompeii and Herculaneum. At 1281 metres high, its slopes are easily visible from Naples, which is about 10 kilometres to the northwest. Excursions depart from Naples to visit Vesuvius, in combo with a visit to Pompeii or Herculaneum.

12- The Palace of Caserta 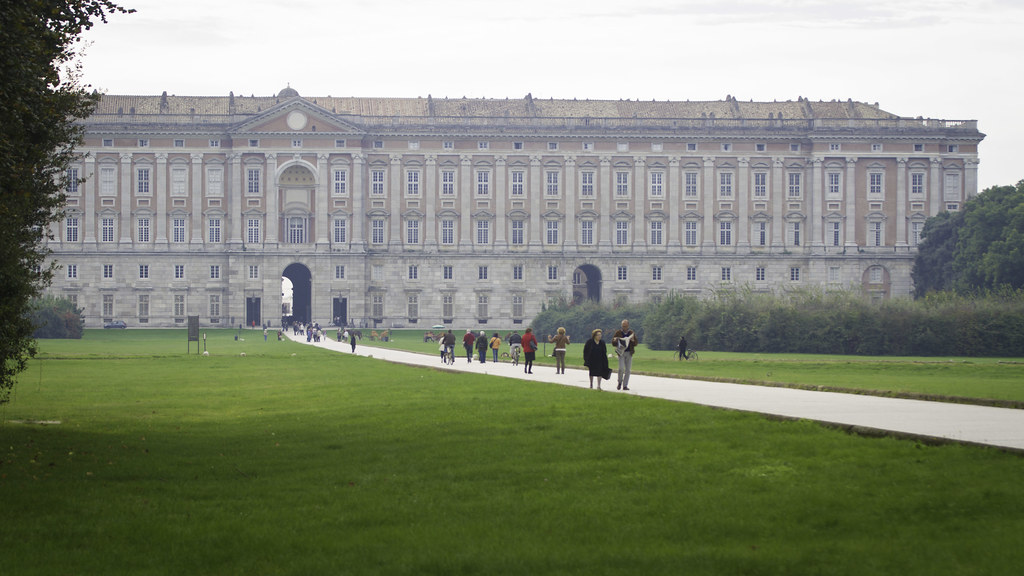 If you come to visit Naples, it might be interesting to discover the Palace of Caserta! Located only 30 kilometres north of the city, it was the former residence of the royal family of the Bumblebees of Naples.

Classified as a UNESCO World Heritage Site, you will be able to visit a vast 61,000 m² palace, a large park and water garden, as well as woods and hunting lodges!

The interior is certainly not open to visitors, but the site offers a magnificent view of the city of Naples and its surroundings!

Other ideas for things to do in Naples

Naples is not only place to discover, monuments to visit, it is also about feeling, tasting, drinking, eating. To visit Naples is to take in all the senses. Here are some tips to live your Neapolitan experience intensely.

Taste Neapolitan pastries: go to the Galleria Umberto I and then enter the Mary shop and enjoy the extraordinary sfogliatelle. (The shop is easily recognizable by the long queue).

Discovering Italian cuisine: of course, how can you be in Naples and not taste one of its pizzas? The pizzas at the Sorbillon pizzeria in via dei Tribunali are a real treat. Not a very touristy place, the restaurant is always crowded because real connoisseurs know where to go to eat a good pizza. Don’t forget to try the Neapolitan ice cream.